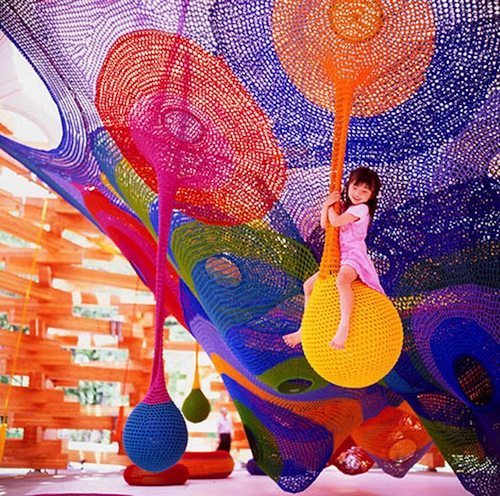 The 10 Most Incredible Playgrounds On Earth

Playgrounds are an integral part of childhood for many youngsters. Yet while the associated exercise is widely believed to promote children’s health and physical development, experts have also highlighted the educational and social advantages of playgrounds. Essentially, they’re spaces where, amongst other things, children can learn concepts, practice skills, increase their problem-solving abilities, and get to grips with basic rules of interaction and communication.

Modern playground designs are capable of limiting bullying and promoting children’s links to their natural surroundings. And given that playground spaces can be such an important part of childhood, perhaps it’s not surprising that various playgrounds worldwide have been built with innovative designs. The results are diverse – a selection of fascinating environments that often appeal to parents (almost) as much as children. Here we look at 10 incredible playgrounds from around the world.

Made up of a small community of 19th-century terraced houses, Brumleby in Copenhagen is one of the first examples of Danish public housing, and in 1997, the residential area was given the Europa Nostra Award in recognition of its conservation and renovation. That said, the small and intricate playground in between the terraces provides the site with an interesting, more modern take on the past.

Three well-planned playhouses mirror the surrounding architecture, creating a playful playground microcosm of historic Brumleby. Each playhouse features the bi-colored ochre and white design used by the adjacent buildings. The area’s distinctive houses were inspired by Danish architect Michael Gottlieb Bindesbøll’s exposure to Italian farm workers’ housing, and the buildings have been listed and protected since 1959. Meanwhile, the playground versions are twisted, as if by a child’s imagination.

Situated alongside the Parramatta River, near the historic district of Newington Armory, Blaxland Riverside Park features what it describes as “the biggest and best playground in Sydney.” The playground boasts a “mega-swing,” a scramble wall, a 12-meter-tall multi-level tree house, tunnel slides, and the biggest outdoor water park in New South Wales.

The water park includes 170 jets designed to create watery tunnels as well as other amusements – from gentle to exhilarating. Covering over seven acres, the park is intended to inspire adults to be active alongside their children, and the surrounding area is full of stimulating history. For decades, the area was used for tweed manufacturing and farming, and later for industrial and military purposes; now, it’s been transformed into a creative park for all the family. Opened in June 2012, Blaxland Riverside Park allows visitors to enjoy a fun and fascinating day out.

One of the benefits children are said to get from playgrounds is the ability to master new concepts; and as Tokyo’s Nishi Rokugo Park is literally built around the concept of recycling, the idea of sustainability and reuse might be something that rubs off on the children who play there. It’s not hard to see why the playground is also known as the Tire Park. Around 3,000 old tires fill the space and have been assembled into a variety of climbable combinations, among them dragons and robots.

The park also has tunnels, mountains, bridges, giant concrete slides, and tire swings big enough for adults. And the playground is completely covered in sand, which makes it a safe, if slightly dusty, area in which to play. This park could arguably be described as one of the most unusual and fun ways to reuse old tires, offering children a chance to learn about recycling while having fun at the same time.

Literature can supply extraordinary ideas that can stretch a child’s imagination. First published in 1726, Jonathan Swift’s Gulliver’s Travels continues to have an influence today – not least at Gulliver Park in Valencia, Spain. Here, children play the miniature people of Lilliput from the story, as they clamber over a giant fiberglass model of Gulliver himself.

Tied into the sand, the figure and his paraphernalia actually make up the playground. Mildly surreal and cartoonish, Gulliver’s figure accommodates slides, steps and other amusements for children. It might be considered an ideal construction for promoting abstract thinking in children, marrying public art, public space and, of course, a larger-than-life literary reference. Situated in the old bed of the Turia River, the park is close to Valencia’s City of Arts and Sciences complex.

Experts believe that playing in a natural environment boosts the physical and cognitive development of children – and the so-called sculptural Schulberg Playground in Wiesbaden, Germany skillfully blends in with the great outdoors. Situated on a hillside with views of the city, the public space offers a lot of appeal for adults, but the park’s futuristically designed play sculpture is arguably its most impressive feature.

Built into the hill, a large sculpture consisting of a pair of green steel pipes bends and rises amidst the trees, with a climbing net stretched between the pipes. Activities and attractions along the structure include a swing, a climbing wall, bouncing “membranes,” and an impressive slide. The whole structure measures 115 feet (35 meters) in diameter, and to meet local safety regulations, at no point is it higher than 9.8 feet (three meters). This park successfully brings an impressive playing space to an urban location.

Colorfully set against a backdrop of trees, picturesque Clemyjontri Park in Fairfax County, Virginia might just look like a regular playground at first. However, parts of the park – including swings, a carousel and monkey bars – have been designed so that disabled and able-bodied children can play side by side. Swings with high backs (for support) and wheelchair-friendly ramps help create spaces where everyone can have fun, regardless of their abilities. In addition, the pathways between the equipment have vibrantly colored, non-slip ground surfaces, allowing even greater access.

Some areas of the park encourage group interaction, while others offer quieter, separate spots for children to play in more privately. The development of social and communication skills is a key benefit of childhood play, and Clemyjontri Park would seem to be a great place to gain such learning – while have fun doing so.

A playground can act like a springboard for a child’s imagination, which is something that should quite possibly be at the forefront of architects’ minds when they’re designing and building new spaces for children to play in. While they were working on a renovation of the Boadilla del Monte playground in Madrid, Spain, architects Eduardo Navadijos and Csaba Tarsoly were aware of the vital role that color and space play in child development.

Limiting themselves to only open structures, the architects created a sizable game room using a sophisticated white and blue color scheme. The design includes common playground features, and the dramatic structure casts shadows that are intended to stimulate children’s imaginations as they play. The result is an extraordinary playground and an astonishing architectural structure.

Of course, play areas don’t have to be flat, one-level spaces, and indeed, some playground architects have incorporated natural obstacles and used them to their advantage. Belleville Park Playground in Paris, France has certainly made the most of its surroundings.

It’s built on a sharp incline, such that the slope forms its primary feature. Essentially, the playground is one big climbing course, and a range of areas offer various inclines to provide children with different degrees of difficulty. Children are challenged to tackle the assorted areas of the park, ultimately leading to a sense of achievement as they are overcome.

Park creators BASE Landscape Architecture used an array of design elements, resembling a flying carpet, medieval defenses, part of a pirate ship, and more. But Belleville’s crowning achievement is situated at the park’s highest point, ready to be used once the rest of the playground has been conquered: it’s a tree house.

Situated at Hakone Open-Air Museum, the Woods of Net playground was built to celebrate the museum’s 40th anniversary. Enclosed in an impressive wooden pavilion is a colorful web, which was hand-crocheted by artist Toshiko Horiuchi MacAdam.

MacAdam specifically designed the net for children to jump on and roll around in. And while the playground is sheltered and the net needs to be protected from the elements, the designers wanted to create a space that blurred the lines between exterior and interior. Entirely comprised of recyclables, the pavilion has become well known for its unusual use of traditional materials since it was opened in 2009. MacAdam says, “My works are much loved by children. After many years, though, they will become worn out and disappear. But these children will have had a great time and will remember these moments.”

Of course, a playground doesn’t have to be a dry space filled with seesaws and swings. In 2012, this water playground opened on the banks of the Gostynia River in Tychy, Poland. The park’s distinctive shape was designed to complement the curves of the surrounding landscape and to avoid having to cut down any nearby trees. The park’s fence and control room were also devised to work with the park’s natural setting.

The non-slip play area is bright and colorful, with blasting jets and fountain features, and at night, LED lights transform the park into a stunning water show. This beautiful water playground provides mental stimulation for children, and – who knows? – it might just teach them about water use, too. Playing with water is a great way for children to learn – it can even help them to understand about math and physics – and what could be more fun than leaping in puddles and making a big splash?