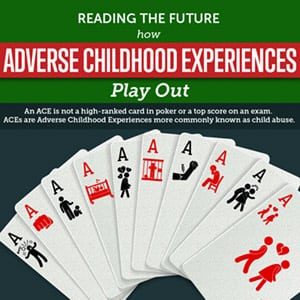 Reading the Future How Adverse Childhood Experiences Play Out [Infographic]

The opening is a fanned hand of 10 cards. All of the 10 cards have a different symbol on them along with the typical A for Ace.

The following symbols go on each card: 1: Head Shouting (open mouth with symbols like @5*^) representing expletives representing verbal abuse, 2: fist representing physical abuse, 3: tall man standing behind a crouched girl representing sexual abuse, 4: baby in crib holding bars crying representing neglect, , 7: syringe and tourniquet for abusing drugs,8: silhouette hands on head for mental illness, 9: hand across an obviously female face representing witnessing a mother abused, 10: bride and groom inside of a heart where the heart is torn down the middle to represent divorce, 6: silhouette of man behind bars to represent incarcerated father

An ACE is not a high-ranked card in poker or a top score on an exam. ACEs are Adverse Childhood Experiences more commonly known as child abuse.

2 in five children have experienced at least one ACE

First bar: stacks of the abuse icons from the cards alternating verbal, physical and sexual until it reaches just over 3 million on the bar graph (3.1 million reports of child abuse per year) (*citation is Childhelp)

Fourth bar: Man behind bars reaching over 2.5 million (2.7 million parents behind bars 92% of which are fathers) (*citation Fatherhood.org)

Fifth bar: literally shatters the scale syringes and tourniquets reach up to 20 million. (*citation is the American Addiction Centers)

These experiences can lead to social, emotional, and cognitive impairment, adoption of health-risk behaviors, disease, disability and social problems, and even early death.

ACEs experiences don’t happen in isolation, and in fact are passed down from generation to generation through genetics and life experience:

Walks three blocks of the board game, and lands on the parents divorcing part. Girl gets plus 1. Walks a few spots of the game (spots are colorful squares like in Candy Land) and lands on crying eyes symbol (mom’s depressed gain one point). Girl walks holding doll the whole time. Lands on a block that is money with wings on it. Says mom didn’t go to work, loses job gain one point… girl walks a few more paces lands on a square that is empty plate of food. Says “neglected to be cared for” or something similar gain one point. Walks further…lands on hand hitting mom (witnessing mom abused gain one point) walks further with doll… lands on Man behind bars symbol… Dad incarcerated gain one point…. Walks further lands on syringe and tourniquet symbol…. Mom abuses drugs gain one point… walks further lands on fist symbol… physical abuse gain one point… walks and walks and walks (represent time passing with more of those Candy Land-like squares show in bold: Ten Years Later. Girl Sits as a teenager. Doll is on the floor, and syringe and tourniquet are on the table in front of her. There’s a thought bubble that states “I never imagined it would happen this way”

An instance of child abuse is reported every ten seconds; ACEs may be passed down from generation to generation as episodes of trauma become encoded within our epigenetics, 48.3 million adults report living with a mild to severe mental illness, A score of 4 or more on the ACEs quiz greatly elevated risk for disease and early death, an ACE from Any Category may increase the chance of suicide between 2 and 5 times. *Substance Abuse and Mental Health Services Administration

ACEs can be greatly alleviated with the right kinds of support:

ACEs are cyclical and can lead to some scary outcomes, but with safe, stable, and nurturing environments, the cycle can be broken. If you’re one of the millions of American who have experienced or witnessed at least one ACE, know that just having one positive adult role model can greatly contribute to your resilience. (*citation is the center for disease control) [c]